This being our second opera experience (the first being Verdi’s Aida at Sarasota in 2016), we now have a point of comparison.

Butterfly was better, and not just because my great-niece was cast. Where Aida was epic and pompous, Madama Butterfly was intimate and evocative story. As we’ve come to expect from Sarasota, the music and sets were great. After praising the ability (and stamina) of Joanna Parisi as Butterfly, we admired the simple, but evocative setting—essentially the same for all three acts—and amazing lighting transitions. Good show.

Rachelle Moss sang Kate Pinkerton, the American bride of the villainous lead male. The part is minor, but meant Rachelle was named on the program (as opposed to anonymously appearing among the wedding party, which she also did in Act One). She and Lt. B. F. Pinkerton (played by Italian Antonio Coriano) were roundly boo’ed at the curtain call, which of course was entirely appropriate.

Side note: we sat next to a Japanese lady who attended dressed in kimono. Treva, of course, struck up a conversation with her, about the types and proper wear of kimono. 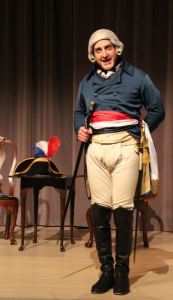 “The easy part was winning the war. More difficult to get these thirteen states to get along and plan for the future,” Gilbert du Motier, Marquis de Lafayette quoting George Washington.

Colonial Williamsburg has discovered a winning formula with these “conversations” with historical characters. In this case, we are guests at a “town hall” meeting in Paris in 1802 to hear the Marquis’ perspective on the revolutions in America and France.

Lafayette, as presented by Mark Snyder, is well-informed and passionate about the cause of liberty, equality and fraternity. He enjoyed an insider’s view of both the American and the French Revolutions. His personal relationship with Louis XVI, George Washington and Napoleon Bonaparte give him rare insights. Guess which told him, “Never disobey me again?”

If one may criticize, as presented, the Marquis’s noble French accent is daunting to lazy American ears. Likewise, the rapid pace of his presentation often outstripped the comprehension of the audience. He recalled facts, names and dates instantly.

Especially poignant is the tale of Lafayette’s attempts to secure the freedom of black American James Armistead, who spied on Cornwallis during the Yorktown campaign by the simple expedient of being his every present, but ignored valet.

It’s a shame these presentations are uniformly scheduled at 1:15 PM (with different characters recurring on “their” day) because that renders them inaccessible to all but vacationers and retirees.

Some presentations curtail with the end of the tourist season, but new programs are in work. Look for Lafayette on the Rights of Man in September. Check Colonial Williamsburg’s website, which unfortunately is not structured for easy searching of these conversations.

“I wasn’t raised to run a plantation, I was raised to be a domestic goddess.”

Among our favorite interpretative dramas at Colonial Williamsburg is this representation of Martha Dandridge Custis upon her arrival at Mount Vernon in 1759, just after her marriage to colonial Colonel George Washington.

Not some dry, academic lecture, this reflection makes Martha’s youth and history come alive. She reveals both the status of women in eighteenth century society and how she came to become the wealthiest widow in Virginia.

While this presentation purports to take place elsewhere, it reflects on Martha’s New Kent county youth and her family’s home in Williamsburg, next door to the site of the hospital through which guests enter the art museums.

Worth an hour out of your visit to CW. A welcome chance to sit and cool off from our warm, muggy Virginia summer.

Based on public and private writings of George Wythe and Thomas Jefferson, this presentation explores ideas in governing one’s life and one’s country. Colonial Williamsburg (CW) re-enactors pack a lot of information and entertainment into an hour. The program displayed the brilliance and the blindness of the Enlightenment and how it contributed both to the American Revolution and to today.

The presentation posits two meetings between Thomas Jefferson and his teacher and mentor (and fellow signer of the Declaration of Independence) George Wythe. The first days before Wythe’s death when Jefferson was president; the second one thirty years earlier when Jefferson is governor of Virginia. Laden with historic and personal quotes and epigrams, it’s almost too much to take in. Education made real and fun.

Wythe is under lauded in current history and unknown outside it. He, as much as Benjamin Franklin, was the philosophic father of Independence and the early republic. He taught law to Jefferson, Madison, Munroe, John Marshall and later Henry Clay. He was the first professor of the first law school on the continent and practically invented American jurisprudence. 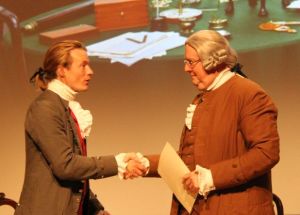 Worth not just an hour, but a trip to Williamsburg. (Admission to CW required.) But that’s not all. This is just one of a dozen offerings each week by CW in the Hennage Auditorium ranging from debates between Jefferson and Patrick Henry to solo presentations by free blacks in Williamsburg to the thoughts of Martha Dandridge Custis as she becomes Mrs. George Washington. All well done and worthwhile.

And, I’m sorry to say, all under promoted by Colonial Williamsburg. It’s difficult for someone who doesn’t already know about this series to find them, even on the CW website. It’s a shame because CW and the re-enactors obviously put a lot of effort into the series. And CW is not supported by a cent of tax money; they have to earn the utilities, wages, construction and other expenses.

I have been visiting Colonial Williamsburg for over fifty years. I loved it the first time; I love it more today. It gets better and better. And, for many Virginians, it’s a short drive and the small expense of an annual pass away.

(I have been remiss in not reviewing earlier presentations. I will try to correct my omissions.)