“To launch the ancient Trojan Wars/ They offered up Iphigenia./ For the sake of our great cause/ I’ll carry my darling to the pyre.”

The unifying theme is the urge to power. Whatever the other motives may be for our actions, Kadare sees that we seek power, even when our actions seem otherwise. And we are just victims with evil, but collaborators.

“We’d taken a path not really knowing where it would lead, not knowing how long it was, ands while still on our way, realizing we had taken the wrong road but that it was too late to turn back, every one of us, so as to not be swallowed up by the dark, had started slicing off pieces of our own flesh.”

The three stories differ in setting time and characters, but are all told from the point of view of a close observer, though not the decision makers. Set in Albania in the early 1980s; parallels to George Orwell’s 1984.

“Yakov [Stalin’s son] … had not been sacrificed so as to suffer the same fate as any other Russian soldier, as the dictator had claimed, but to give Stalin the right to demand the life of everyone else.”

Kadare’s critique of Enver Hoxha’s absolutist regime in Albania from 1944 to 1985 can be leveled at many western democracies. Whichever side eventually wins the struggle for power, the impact on the people will be the same—indistinguishable from Albania’s Hoxhaism, China’s cultural revolution, or Russia’s Stalinism. Yes, it could happen here; clues are all around us.

“Let us revolutionize everything … How many years of such a drought would it take to reduce life to a stony waste? And why? Only because when life is withered and stunted, it is also easier to control.”

There are days that define your story beyond your life. Like the day they arrived.

Excellent hard science fiction. Despite that–and several Academy Award nominations and a Nebula and Hugo Awards–it was ignored at the box office. Probably because it was too cerebral.

Everything you do in there, I have to explain to a room full of men whose first and last question is, “How can this be used against us?” So you’re going to have to give me more than that.

Amy Adams makes the movie. She has the best part, best lines, and despite having only one glamour scene looks believable through it all. Whitaker and Renner stumble through their parts.

“Language is the foundation of civilization. It is the glue that holds a people together. It is the first weapon drawn in a conflict.”

There’s also a spiritual parable quality to Arrival which can’t be ignored. Let each make of it as he or she will.

“Despite knowing the journey and where it leads, I embrace it, and I welcome every moment of it.”

“Today’s massive container ships, jet planes, the Internet, and an increasingly globalized supple and manufacturing network are just further evolutionary steps in a process that has been ongoing for the past five thousand years.’

Economics 101 as told by an elderly English-wannabee uncle. Old-fashioned syntax mars a serious, in-depth study of world history as seen by an economist. (When you’re only tool is a hammer, every problem looks like a nail.)

“What you reckon owning land be like?” “We’ll wake singing and go to bed laughing. We be having both joy and peace.”

Historical fiction of the best sort. Robinet looks into the lives of freed slaves in the post-Civil War South through the eyes of a young freed slave. Pascal has a heap of challenges, but how he learns to face them makes for entertaining and educational reading.

“White folks should be glad we free so they don’t got to be so mean no more.”

Thoroughly researched. Of necessity in a story this compact and intended for young readers, Robinet simplifies her peripheral characters to allow extra depth to her central cast. Nevertheless, the spectrum of characters presents END_OF_DOCUMENT_TOKEN_TO_BE_REPLACED

Book Review: Everyone Brave is Forgiven by Chris Cleave

“I was brought up to believe that everyone brave is forgiven, but in wartime courage is cheap and clemency out of season.”

Outstanding. A penetrating look at love, war and humanity presented with external and internal dialogues that are simultaneously honest and humorous. Gives the reader a sense of time, place and circumstance which few authors achieve. Captures the feel of being at war, in love, immortal, dying, indignant, and learning to doubt everything, then learning to trust again.

“You are a mousetrap of a friend, all soft cheese and hard springs.” “I use you for practice. One day I’ll have a husband.”

“I cast a shadow in your presence.”

A great premise: What if Galileo was a sentient theropod on a Jovian moon? Good development of raptor culture and metaphors. Good unraveling of the astronomical puzzle. Okay storytelling.

“Your heroism saved my life.” “It was nothing.” “My life? Or your deed?” “I’d like to think that in either case, that’s not true.”

Got the dynamics of planetary body movement and observation correct enough to make it fun for science nerds, while enough social, language and philosophy filters through to please right-brain-dominant readers.

“No God meant no meaning to it all, no higher standards by which everything was measured.”

The protagonist is certainly The One. Everything is too easy: hunt, astronomy, love, and politics. He swims in secret allies. One pops up whenever he needs. People conveniently die on cue too. (Cover quibble: saurian looks too like a T. Rex. More spoilers in that cover than this review.)

“The world might be coming to an end. But they’d worry about that tomorrow.”

Book Review: Words Are My Matter: Writings About Life and Books, 2000-2016, with a Journal of a Writer’s Week by Ursula K. Le Guin

“Listening is an act of community, which requires space, time, and silence. Reading is a means of listening.”

I wanted to like this book because I respect Le Guin as an author and a person, but two stars was a gift. This drivel seems tossed together to justify the selling price. It won awards perhaps because it says all the right things. Or it was her turn.

“There seems to be a firewall in my mind against ideas expressed in numbers and graphs rather than words, or in abstract words such as Sin and Gravity.”

She has opinions and states them well, but with precious few facts. She feels rather than thinks, and she’s proud of it. Yet she prefers “the fierce reality of true fiction” over “wishful thinking.”

“I’d rather follow a narrative than a thought, and the more abstract the thought the less I understand it. Philosophy inhabits my mind only as parables and logic never enters it at all.”

Le Guin admits she writes fantasy because she can’t do the math for real science fiction. That’s legitimate. Others should be as honest. But then she degrades hard science fiction as elitist and reactionary. That’s hardly fair. I like fantasy–her kind of fantasy–but I like science fiction that makes me think about velocity vectors and Hohmann transfer orbits.

“… the critics increasing restriction of literary fiction to social and psychological realism, all else being brushed aside as sub literary entertainment.”

Skip the reviews. They’re good but she both tells you too much and tells you how to think. Many folks like to be told how to think, but even when I agree with her I’d rather find my own way.

“The New York/East Coast literary scene is so inward-looking and provincial that I’ve always been glad not to be part of it.”

Her defense of abortion, whatever you may think on the topic, is among the best I’ve ever read. I wonder what her child would have thought.

“It’s hard to ask a child to find a way through all that [reproduced voices, images and words used for commercial and political profit] alone.”

Non-fiction descriptions of the ravages of slavery on America always beat the fictionalized accounts, no matter how dramatic. Twelve Years a Slave (on which this movie is based) and The Life of Frederick Douglass: an American Slave are more vivid and hit harder than even the melodrama of Harriet Beecher Stowe’s more famous Uncle Tom’s Cabin.

“No man of conscience can take the lash to another day in and day out without doing damage to himself.”

This 2013 award-winning production of Solomon Northup’s 1840 ordeal loses none of its power for its modest budget and straight forward story telling. Brutal but realistic … unfortunately.

“Slavery is an evil that should befall none.”

“She cannot chain my soul.”

Award-winning young reader account of the plight of slaves in colonial North America. Being in Rhode Island or New York was no protection in 1776. Isabel was probably more articulate in her feelings, but those emotions ring true. Honest look at the errors and hypocrisy of both sides.

“It mattered not. My bones were hollow and my brainpan empty.”

Anderson skillfully wove historic facts–battles, destruction of the king’s statue, the fire, Hessians–into plausible descriptions of the life and observations of a young enslaved girl. The whole has a readable, authentic feel.

“Both sides say one thing and do the other.”

Minor chronological errors, but closer to fact than many popular Revolutionary War dramas.

“I was chained between nations.”

The Seeds of America series continues with Forged, previously reviewed. 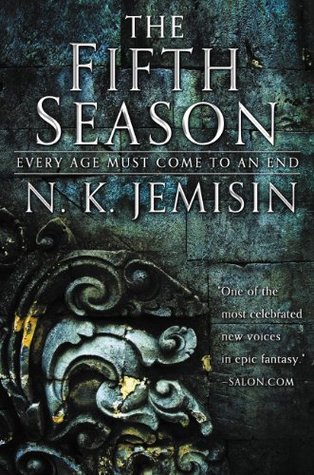 “Winter, Spring, Summer, Fall; Death is the fifth, and master of all.”

I wanted to like this. Great concept: a geologically active world with people who can interact with earth and stone. Periodic global catastrophes give rise to “stone lore” and a churning of society. Well written.

“You certainly weren’t expecting to have to deal with the end of the world on top of everything else.”

However, the three main story threads are further confused by varying person and tense, not to mention chronology. (Sometimes second person (“you”) and present tense.) Distracts.

“Survival is not the same as living.”

Unnecessarily crude and pornographic. Almost quit two-thirds through. She invented a clever world-appropriate set of curses, but peppered the text with offensive Anglo-Saxon words.

“Who misses what they never, ever even imagined?”

Jemisin is a talented writer, but am not inclined to try her works again. This book won Hugo and Nebula awards, whatever that means these days.

“Neither myth nor mysteries can hold a candle to the most infinitesimal spark of hope.”