“Death came in along the ecliptic, undetected until it cracked the starship’s hull and began to hunt.” Did she mean “elliptic”?

Excellent. Czerneda created an alien lifeform which felt both familiar and other. First person narrative draws the reader into the protagonist’s thoughts and crisis.

“I can do this, I thought. I realized, belatedly, that Esch had not doubted me. I had doubted myself.”

In classic fashion, begins well after the start of the story, if not exactly in the middle. Backstory is supplied as needed. Well done.

“There are always those who fear the unknown. And what am I but END_OF_DOCUMENT_TOKEN_TO_BE_REPLACED

“You are saying God cannot intervene in this plague?” “I am saying that perhaps God has already done his intervening by creating us.”

Published in 1989, Grass addresses many contemporary issues setting them in far future science fiction. Very slow start. You can’t skip the first hundred pages, but once the story begins to move, you’ll wish Tepper had. Lots of passive voice and participles; slows the pace. Addresses religion more honestly—bad and good–than most modern works.

“Seeking her soul, he had only taken her body, finding there a hollowness he had not expected.”

Not as good as Chambers’ previous. Too many, too-similar characters. Lots of head hopping, data dumps, and “as-you-know, Bob” conversations. Had the previous books in this series not been so much better, it might have gotten another star.

“The kind of excited that occurred when the chances were good that everything would be okay, but you were still holding your breath until said okayness was a done deal.”

Good mix of viewpoints. So much so that it occasionally intrudes on the story as artificial–or at least overdone. Lots of propaganda; some subliminal suggestion, too. A certain politicized word pair occurs several dozen times.

“She looked at Pop, entropy incarnate, and wondered if his present would be her future. She wondered which of her kids would sit in the extra chair in the exam room and lament the days when she’d been awesome.”

Quibbles: 1. The inciting incident flunks space logic. How could they have built a generation ship without pressure bulkheads and automatic self-sealing doors? Then she posits a single apartment still pressurized five years later, despite the plumbing which would certainly ventilate it? 2. The whole ship design is stupid and wasteful. Honeycomb doesn’t have corridors. How do people move without destroying the structural integrity of the design?) 3. “Nothing went to waste in the Fleet.” Not true, the Sunside Joyride wastes of unrecoverable propellant. 3. “Evolution is often thought of as a glacial process, but …. Rapid environmental change can prompt rapid physical change.” No, it prompts rapid die offs. After the meteor hits is too late to evolve.

“Our species doesn’t operate by reality. It operates by stories.” “We are a longstanding species with a very short memory.”

“The way we win matters.”

Hard science fiction; hard message. Sometimes we become like what we hate, even as we seek to defend ourselves from it. At the same time, to defeat a foe, we must understand him; as our knowledge becomes complete, it gets complicated.

Based on the book of the same name by Orson Scott Card. I prefer the book; your mileage may vary. The movie ends looking beyond the end of the first book toward Ender’s quest for redemption.

Proclaimed by Variety as among the “Biggest Box Office Flops of 2013,” unlike popular popcorn burners like the Marvel movies, this takes reality seriously. It also understands that consequences are real and not always favorable. When you weaponize children, you abuse them. You abuse humanity.

Six? Yes, this is what comes from giving five stars so liberally. This is the best book I’ve read this year (102 and counting), not just the best science fiction, fantasy, historical fiction or biography. Why didn’t it win a cluster of awards? Was it as fun to write as to read?

“Rain fails on everyone; lightning strikes some.”

Not necessary but recommended you read The Sparrow first. Russell skillfully weaves in the backstory when you need it.

“No one was deliberately evil. We all did the best we could. Even so, what a mess we made of everything.”

Each character the protagonist of his or her own story. Russell assures no actors are bad or good in their own eyes. Each point of view character does END_OF_DOCUMENT_TOKEN_TO_BE_REPLACED 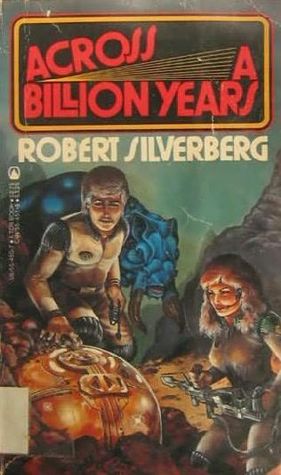 Book Review: Across a Billion Years by Robert Silverberg

“We (archeologists) are enemies of entropy; we seek to snatch back those things that have been taken from us by the years.”

Classic science fiction. Considering it was written in the 1960s, this book’s science fiction works better than many current offerings. It flunks sociology, as do many contemporaries.

“The first rule of archeology is be careful with the evidence. No, that’s the second rule. The first one is find your evidence.”

“It’s unhealthy to gulp down a surfeit of miracles; gives one indigestion of the imagination.”

Telepathic communication is discussed as “a full meeting of the souls. It is the end of secrecy and suspicion, of misunderstanding, of quarrels, of isolation, of flawed communication, of separation.” That was holy writ in the 1960s. Not so long as humans have greed and pride, not to mention psychopaths. Those who control those impulses would be censored regardless of the mitigating factor of their behavior. Communication is good; knowing each other’s every thought, not so good.

“If we haven’t succeeded in blowing ourselves up by A. D. 2376, we’re probably to make out all right. Maybe.”