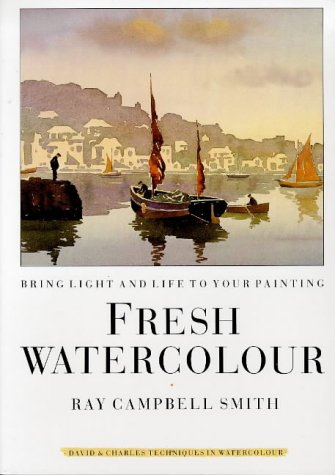 Sorry, no quotable quotes. Smith writes well, but it’s a lot like reading assembly directions–they only make sense to one doing the assembling.

The pictures, on the other hand. Should be enjoyable to anyone who likes art, and watercolor in particular. Smith demonstrates how to get luminescent skies and depth with a minimum of busyness in paintings. (I can’t insert illustrations without violating his ownership rights, of course. See cover art.) 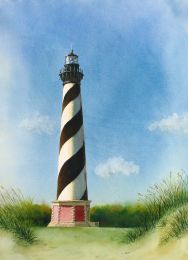 My self-supporting hobby—as opposed to my money-pit writing hobby—is painting in watercolors.

I paint with transparent pigments (no white or black) on watercolor paper and canvas. As you can see, my approach reflects my former years of painting oils. I like dramatic contrasts and fully-saturated colors, taking advantage of a few tricks which only watercolor allows. 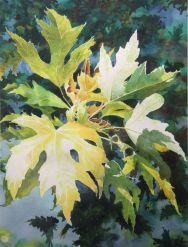 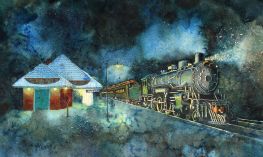 Recently I exhibited a one-man show at Westminster-Canterbury Richmond, a retirement community, and sold four paintings, the most I’ve ever sold at a single event. Thumbnails of those paintings accompany this article. 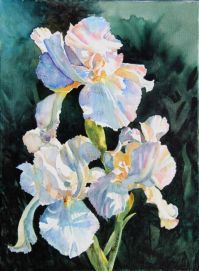 The banners that rotate over the top of this blog are details from my paintings. Other samples of my art may be from at my gallery on Flickr. 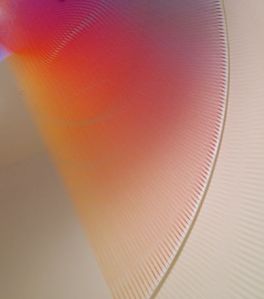 On August 25, 2012 Voyager I passed through the heliopause to become the first manmade object to enter interstellar space. Last week I read Einstein’s The Theory of Relativity and Other Essays. Saturday Treva and I viewed the WONDER exhibition at the Renwick Gallery in Washington, D. C.

How do these events connect? Reading Einstein set me thinking about Voyager I because he claims real physics only applies in interstellar space—far from the interference of stars and the debris fields (including planets) which orbit them. Reflecting on questions of weight versus inertia, and reality versus theory, and art, I came to realize how little we know—about ourselves, about everything.

Avoiding math that would hurt my head, I understand that the great physics question of two last centuries was reconciling gravity and inertia. Einstein says the force that keeps an object at rest (or continuing in the direction it’s already going) is not the same as the force that apparently is pulling it downward from the surface of the earth. Yet they act simultaneously on everything.

Out beyond Voyager it’s empty and cold, but not dark. If you were riding on Voyager, you’d see all the stars we see—probably better. How does the light get there? Photons? Even way out there the mass of our Sun and other stars would tug on you. How? We don’t know.

Until late in the nineteenth century, scientists still referred to aether (not the chemical diethyl ether) as the material which filled space and carried light, gravity, etc. because they couldn’t figure out how light and gravity could cross nothing. Think about it. Before the concept of the photon as a massless carrier of light energy, scientists had no way to explain a phenomena we all experience daily. Even still, no one’s seen a photon. We just see the effects of their presence. Very pretty effects sometimes. As Gabriel Dawes’ plexus art at the Renwick or Crystal Bridges Galleries (above) illustrates.

Gravity poses the same problem. Scientists think/hope there may be gravitons that similarly “mediate” gravity. But there are problems with that idea. Too deep for me.

I look up at a night sky. How does light travel through nothing, unmeasurable unless it interacts with something, until it interacts with my retina, which sends nerve impulses to my brain, which presents an image to my consciousness (whatever that is), which “I” see as stars?

Robert Genn died this week. Many never heard of him, but he visited a circle of artists twice each week by an email letter. His postings were both encouragement and instruction, leavened with a fair measure of philosophy.

His daughter Sarah plans to continue–has already started to continue the art letters.

“We live our short spans in the vortex of a miracle, and while we may not be the center of that vortex, it is magic to be anywhere in there.” Robert Genn 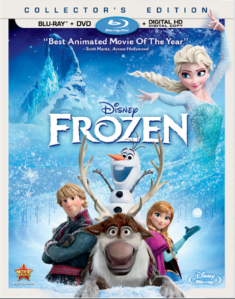 (Seen twice: once in theaters, once on Blu-Ray)

Whoever writes liner notes for Disney must be illiterate. “Walt Disney Studios presents a chilly twist on one of the most humorous and heartwarming stories ever told.” Hans Christian Andersen’s “Snow Queen”? I don’t think so. The original Snow Queen was more like the White Witch in C. S. Lewis‘ Narnia than the older sister of this adaptation. In fact, this entire story is pretty much cut from whole cloth. (Not that that’s a bad thing, and not that Disney hasn’t turned fairy tales inside out before–often to good effect.)

Hooray! The Olympics are over. We can go to bed at a decent time. They aren’t, you say? Well, to us, everything after the women’s figure skating final is a mere formality. While a good time wasn’t had by all, there was some really good performances and at least one questionable score. (See my previous posting about art at the Olympics.)

Yes, Eric showed us how to record the shows to view later. But, given our TV watching habits–or non-habits, we’d never watch them. WE hear some children have never seen commercials and think the TV is broke when one pops up because their parents always “fast forward” through them.

No event should be included in the Olympics which is scored by a judge. If finishing order or a clock or a tape measure is insufficient proof of who won, relying on the eyes and judgment of mere mortals moves the event from sport into art. I’m okay with art; I fancy myself an artist. I’m happy to have my work judged; I’m even happier to win. But that’s art–subjective. Sports should objective. Judges aren’t; can’t be.

Having said that, we enjoyed the Ice Dancing finals Monday night. I’m prejudiced (yes, me, too–we all are one way or the other) in favor of skaters who wore classical costumes and skated to Romantic (as opposed to romantic, and certainly Modern and modern) music.

The biggest problem with supposedly impartial judging is not political (like the infamous East German judge), but END_OF_DOCUMENT_TOKEN_TO_BE_REPLACED