“The worst acts are often justified by the best of reasons.”

Another rousing tale on the imager world. Much repetition of action and angst from previous stories.

“What else can we do but accept what we cannot change?”

Laced with aphorisms which give the tome a sense of wisdom. Many are restatements of well-known adages. Book of Rholan is a boring, intrusive injection of sermonizing.

“What is force? What’s the difference between persuasion and force?” “You know very well, dearest. So does every woman.” “There sometimes is a narrow line….” “Only men think it’s narrow.”

The preceding is perhaps the best dialogue between END_OF_DOCUMENT_TOKEN_TO_BE_REPLACED 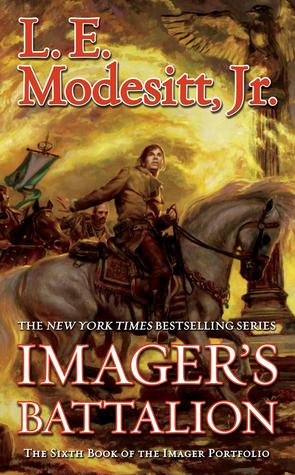 “I want a land where Pharsi, scholars, and imagers can be what they will, under the same laws as everyone else.” “You are either mad … or a lost one.” “Is there any difference?”

A fun story, well-told, but lots of repetition–and war. One continuous series of battles with the climax mirroring that of the previous volume. Every skirmish and every staff meeting, not to mention the bureaucratic in-fighting, related in excruciating detail.

“He doesn’t forget, Quaeryt.” Neither do I. Ever.

Book of Rholan has become Modesitt’s philosophic hand puppet. Much of that philosophy–in fact the basic plot–is foreshadowed in the first three books of this series, which occur hundreds of years after this book.

Editing quirks: “In less than a fraction of a quint …” Twice. “Rain began to come down.” What else? Dozens of blotting head and adjusting brim cap.

“It’s hard not to think about the consequences when you’re the one who causes the deaths of so many.”

“We want wonder in the world; things we can’t explain. We want to be fooled, even though we know there’s no such thing as magic.”

Refreshing short story about who we really are. Lots of magic terminology. Spoiled only slightly by too much explaining at the end. As he said, we don’t want to know how the trick was done; sometimes we’d rather not know there was a trick.

“Make the audience walk as far as possible from the trick to the effect.”

Book Review: The Christian’s Secret to a Happy Life by Hannah Whitall Smith

“Perfect obedience would be perfect happiness, if only we had perfect confidence in the power we were obeying.” Hannah Whitall Smith

“It is a fatal mistake to make our emotions the test of our oneness with Christ. If I have joyous emotions, I may be deluded by thinking I have entered into Divine union when I have not; and if I have no emotions, I may grieve over my failure to enter, when really I have already entered. Character is the only real test. God is holy and those who are one with Him will be holy also.” Hannah Whitall Smith.

Readers must understand that Smith defines happy differently than many of her contemporaries and many of us. If anything her life was far from easy or happy in the sense we use that word. Nevertheless this book has influenced Christians since.

“In 1870 Hannah Whitall Smith wrote what has become a classic of joyous Christianity, The Christian’s Secret of a Happy Life. The title barely hints at the depths of that perceptive book. It is no shallow “four easy steps to successful living.” Studiously, the writer defines END_OF_DOCUMENT_TOKEN_TO_BE_REPLACED

“You will either break the world or it will break you.”

Another extended sermon on morals and actions disguised as an adventure fantasy. The pace is occasionally glacial and everything–even the disasters–are too easy and predictable. Still, excellent storytelling.

“And what right did you have to act as justice and executioner? No right at all, only the responsibility not to let a man who caused death after death keep doing it when no one else could or would stop it.”

Finally addresses his protagonist’s vigilantism. Even allows him to be troubled by the lawless monster he might become as the sole arbiter of guilt and innocence.

“Could it be that all evenings are good, because each offers us the possibility of affirming what we are and what we can be at our best? If there were no evil … could there be good? And what would good be worth?”

Extended meditations on beliefs, faith, doubt, and action. Created a religion as a hand puppet for his musings, but did a better job than many who END_OF_DOCUMENT_TOKEN_TO_BE_REPLACED

“So, cynicism is merely accuracy when no one wishes to accept that accuracy?”

Steampunk Avenger. Excellent story, but the mechanics needed another editing. Set several hundred years before the first three. Pontificating more organic to the tale. The perceptive reader feels closer to Quaeryt’s concerns and trials. The solutions, of course, are too easy, but that’s the nature of fantasy.

Integrates his invented magic and religion seamlessly into END_OF_DOCUMENT_TOKEN_TO_BE_REPLACED

“I may be a powerful imager, but that doesn’t mean I can save people from their own weaknesses and stupidity. I have enough trouble trying not to do stupid things myself.”

A complex, slow-developing end to the first three stories in the Imager series. (The next book is a prequel.) The protagonist keeps telling us he doesn’t get it–and reviews the disjointed puzzle pieces he does have ad nauseam–then he gets it and acts. And the reader is left to connect the dots.

“What we know and what we feel, deep inside, aren’t the same. People are like that. Sometimes it’s the ones closest to you–especially close friends and family–who hurt you the most.”

Modesitt is a master storyteller. Plan to get sucked in and dragged along. Plan to enjoy it. But don’t END_OF_DOCUMENT_TOKEN_TO_BE_REPLACED

Book Review: The Age of Eisenhower: America and the World in the 1950s by William I. Hitchcock

“Eisenhower had that rarest of gifts in politics: he brought America together.”

Damns Eisenhower with faint praise. Following the rising tide of academic and popular reappraisal of Ike, Hancock tries to hew to the old bumbling amateur angle, even as he says he rejects it.

“These first years of his presidency, Eisenhower laid down a blueprint for the warfare state–an official plan to mobilize the nation and put it on a permanent war footing. The military-industrial complex had begun to take shape.”

“Eisenhower, [Garry] Wills believed, ‘had the true professional’s instinct for making things look easy. He appeared to be performing less work than he actually did. And he wanted it that way. An air of ease inspires confidence.”

Shoddy scholarship. Adds his snarky quips at the end of paragraphs, then sets the footnote after it, implying that the cited source (often in the 1950s) is to blame. “That suited Eisenhower fine.” “Middle-class paradise on a presidential scale.” “The comparatively glamorous and graceful Jacqueline Kennedy.

“The central paradox of the Eisenhower presidency: that a man so successful at the ballot box and so overwhelmingly popular among voters could have been given such poor marks by the political class. His critics never grasped the profound appeal of the man and never appreciated the depths of his political talent.”

Other, better modern investigations into this most-underrated president of the twentieth century–for example, try any David A. Nichols work.

“Dwight Eisenhower must be counted among the most consequential presidents in modern American history.”

“I’m being pushed into doing things I’d rather not do because the alternatives are worse.” “Sometimes, that’s life.”

Better than the first Imager story. First person point of view makes for a decidedly linear plot, but the action moves better in this second episode. This volume lacks the epigrams which headed each chapter in Imager.

“What we do … is not all that we are, nor all that we could be. Reading opens one’s eyes to the possibilities.”

Modesitt takes us into the musings of someone who follows the tenets of a religion he doubts, defends a country he’s sure isn’t perfect, loves people who are flawed, and represents a body of people even as he disagrees with its leaders.

“No matter what you do, someone’s unhappy. And the better you do it, END_OF_DOCUMENT_TOKEN_TO_BE_REPLACED

Book Review: The Fremantle Diary: A Journal of the Confederacy by James Fremantle

“Nowhere is the ignorance of what is passing in the South more profound than it is in the Northern States.” Fremantle 1864

A fascinating primary document from the height of the Civil War: An English officer traverses the Confederacy, interviewing the leaders and soldiers. His assessment: even after Gettysburg the South could have won. Granted, by that time he had Stockholm Syndrome symptoms. His northern contacts didn’t enlighten him otherwise.

“All these [sectional] interests disappeared when the war ended. People wanted only to forget, and the diary was buried with the past. Today, the national mood has changed. Sectional bitterness has given way to a common pride in the glory and courage of both sides.” Walter Lord, 1954

On the other hand, as the preceding quote indicates the 1954 editor missed the mark entirely.

“A people in which all ranks and both sexes display a unanimity and a heroism which can never have been surpassed in the history of the world is destined, sooner or later, to become a great and independent nation.” Fremantle

Fremantle’s journey and journal were equally amazing. Landing in Mexico, he traveled across the south, sharing public transportation and accommodations with common travelers, connecting with Confederate leaders whenever possible, who usually welcomed him into their confidences and occasionally their staff, all the time understanding he had no official standing (but perhaps still hoped England might save them). to return home, he traversed the North as far as New York City and shared passage to England with Northern partisans.

“But the mass of respectable Northerners, although they may be willing to pay, do not very naturally feel themselves called upon to give their blood in a war of aggression, ambition, and conquest.” Fremantle