Simple. They’re human. They tailored their findings to their perceived expectations of the then President. Neither Bush nor Obama (nor the public) should blame them for catering to their expectations when each made his preferences so clear.

Then how do we get better intelligence? Elect a chief executive with enough integrity that his staff will tell him the truth, rather than what they think he wants to hear.

No, I can’t name a modern President who did that. Maybe Truman or Eisenhower, if you accept them as modern. Certainly not JFK or Nixon. I really don’t think Reagan or Clinton.

Integrity is an endangered specie inside the Beltway, perhaps due to lack of safe habitat.

Living in the Spirit, a study of Paul’s letter to the Romans, is now available in both paperback and ebook formats.

The print version of Living in the Spirit has been available for several week, however I’ve been waiting for the ebook version to become available before “announcing” my book.

Living in the Spirit is a straightforward examination of Paul‘s timeless message to all Christians in any time or place.

You can order it at your local book store, or from any on-line book retailer, or directly from the Publisher at http://www.crossbooks.com or call 866-879-0502.

It is a universal truth that people want to run their own lives.

Hence, we in the West assume they want/need/prefer a democratic government. We’re wrong. There are many ways in which people can control their lives in what outwardly looks like an autocracy or plutocracy or bureaucracy; some of them work.

Similarly, we think we must therefore impose Western institutions on those benighted fools, whether they like it or not.

I remember the day I officially became “old.” Visiting southern California in the 1970s, I heard a radio commercial for home equity loans. Being raised in the culture of middle America, I’d never heard them.

“That’s stupid,” I said out loud. “Who’d fall for such a thing.” I was wrong—starting in California (and probably New York) a lot of Americans “fell” for it. In the short term they reaped lower interest loans (compared to credit cards) secured by the equity they’d built in their homes.

That bit about equity, of course, was the Achilles’ Heel of the scheme. It only worked as long as your home value increased. But that was the 70s, prices were going up—often fast.

We had just bought our first house. I paid a crushing (then) monthly payment of END_OF_DOCUMENT_TOKEN_TO_BE_REPLACED

(Pay no attention to the Global Warming part of the headline; it was merely to get your attention. It worked.)

We received our first Christmas card Friday. It makes little difference that it was from a commercial concern. Or, rather, maybe that’s the entire point.

Back when Europeans used the Julian Calendar to track time, they got a quarter day out of sync every hundred years because, while they had Leap Years, they didn’t omit them each century to accommodate Earth’s odd year: “The vernal equinox year is about 365.242374 days long, measured in ephemeris time.” The Gregorian calendar corrected for that. Sort of.

It seems that American retailers have a similar calendar creep, except it’s the seasons which are adrift. Halloween, which has become the second largest “holiday” in terms of sales, stuff started appearing in August.

And, as I said, we just got our first Christmas card.

From a Christian outfit, no less. You’d think they’d be leading the “Keep Christ in Christmas” charge.

You’d think India and China would want to reduce their pollution for the sake of their people. But, no, they’d rather have a drum to beat. 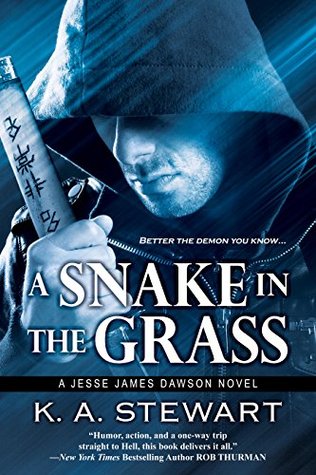 A Snake in the Grass (Jesse James Dawson #4) by K. A. Stewart

Starting to bore. Same old, same old. What saved this particular story were the ancillary characters: Carlotte, Terrence and Svetlana, of course. And Henry.

The problem with series like this (and Kevin Hearne’s Iron Druid, D. B. Jackson’s Thieftaker or Jim Butcher’s Dresden Files) is that the author must raise the stakes in each successive story … without becoming silly. (Yes, I know, it’s silly to quibble about verisimilitude when discussing fantasies. Stay with me.) Most of the way through this book, K. A. Steward worried me that she was losing it. This is the fourth Jesse James Dawson story. But the last few chapters, even though they weren’t really part of this story, gave a satisfying payoff.

Views on expressing opinions in America are changing. You’d think all speech is protected by the First Amendment, but it isn’t and shouldn’t be.

A recent Pew Research survey showed Americans thinking religion’s influence as waning, but 49% of those polled said they support churches and other houses of worship expressing views on political and social questions—up from 40% in 2012. That still leaves the nation divided: 48% said churches “should keep out” of politics. While I agree pulpits should not be campaign platforms, church leaders should be free to discuss—even endorse or oppose—trends in the culture.

Interesting also is the Democrats tend to feel better about how their party is handling various social issues than Republicans.

The Nazi Officer’s Wife: How One Jewish Woman Survived the Holocaust is a gripping first-person account of a Austrian Jew who came of age in Vienna on the eve of the Nazi takeover of her country, upending her world and killing most of her family. Her ultimate strategy to avoid detection provides the book’s title.

Great voice. The reader rides inside of Edith as she suffers shock and degradation, then panic and rage as her world dissolves. Her desperate search to survive reminds us that each of the millions murdered in the Holocaust were individuals—as different from each other as us—and yet part of a community which, because of its cultural tenacity, has been vilified by Egyptians, Philistines, Babylonians, Persians, Romans, Christians, Moslems and atheists for most of history. Being the world’s scapegoat is a burden.

This story grips the reader much as The Book Thief (my review), substituting Edith’s immediate living voice for the distant, melancholy voice of Death. Definite movie potential.

Thanks to her daughter, without whose inquiries, this story may have been lost.

Appropriate recognition given to Susan Dworkin. Too often “ghost writers” so all the work and get little credit. 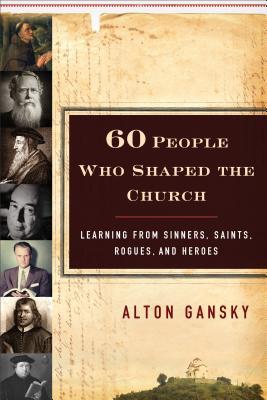 60 People Who Shaped the Church by Alton Gansky

(Three Stars our of Five)

Moderns have the idea that only what’s new is worthwhile. Many also think that what’s worthwhile is new. Both are wrong. (C. S. Lewis labeled the first mistake “historicism.” The second error is historical ignorance, as condemned by George Santayana.) Many trends in the modern church, as well as other institutions, are rooted centuries back. This volume is a useful corrective.

Given my background as a lifelong student of history, I inevitably like a well-written history of the church. This is well-written. An easy and informative read with a clear explanation of why Gansky thought each person–some decidedly not Christians–shaped the Christian church.

One might quibble with who was included and who excluded but Gansky did a great job encapsulating each person’s life and significance in four to six pages. The Roman Emperor Diocletian is not an obvious choice, but he certainly shaped the church. I would have included Saint Patrick and Count Zinzendorf and dropped Handel, Dostoyevsky or Graham. We all love Billy Graham, but in a hundred years he’ll be as forgotten as Charles Finney and Billy Sunday. The vote is still out on whether those evangelists actually changed the church. Maybe we do ourselves a disfavor by forgetting them. That’s the point of books like this.

But more than a mere history, 60 People Who Shaped the Church explores the cultural context and forces at work in the world of historic and contemporary Christianity. A bit Europe biased, but for centuries Christianity spread little beyond that continent.