Hopeful science thought for the New Year (from Dr. Helen Fisher on edge.org via the WSJ):

“Natural selection [favors] those who responded negatively to the one malevolent intruder, rather than positively to myriad friendly guests.”

But, “happily-in-love long-term partners [overlook] the negative to focus on the positive aspects of their marital relationships—… ‘positive illusions.’ … We humans are able to convince ourselves that the real is the ideal.”

“The neural roots of tolerance, mercy and pardon may live deep in the human psyche.”

Happy New Year, especially you who survived and thrived in long-term, loving relationships. 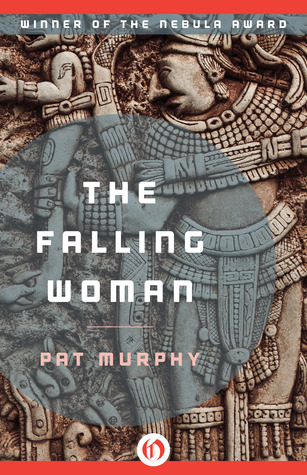 “Each culture defines its idiosyncrasies and then forgets it has done so.”

Maybe 4.5 stars. An exceptionally fine story which defies neat genre assignment. It won a Nebula Award, so I feel somewhat safe calling it fantasy, but this is a great, thought-provoking tale for any reader.

“One frightens oneself; it is not the shadow that frightens us.”

Published in 1986, it argues against the proposition that women didn’t write or weren’t recognized for writing first-class fantasy and science fiction. In fact, all the major characters of this tale are women. The men seem included for merely verisimilitude.

Much good information about the ancient Mayans and the field of archeology, without the clumsy data dumps so intrusive in so many novels. It also explores how mothers and daughters have extra power to drive each other crazy and/or help each other out of it. Good job.

“Many people we call insane are just in the wrong place at the wrong time.”

Quibble: The paragraphing is so awkward that the reader must often stop to puzzle out who is acting or speaking the actor often changes midway through paragraphs.

“The dead teach us things.”

“The world conspires to take everything from us in the end.”

Like most anthologies the junk outweighs the jewels, but in this case the good stories are very good: worth the price of the whole collection. I’ll ignore the garbage and review the gems. Skip the first two, they’re trash. If there’s a theme to this collection, other than raising money for authors with medical bills, is that these are stories about story.

“To cling to common wisdom, no matter the evidence right in front of one’s nose, was an affliction as old as love.”

By far the best story in the set is “The Game” by Michael J. Sullivan. If you read no other, read this one. It’s the best take on “Dial ‘F’ for Frankenstein” I’ve seen in decades.

“Ignore it the way all rational men ignore all irrational things.”

“Jury Duty” by Jim Butcher is great if you like Dresden Files, which I do.

“No man’s an island. Not even the ones that think they are. Especially not them.”

“Uncharming” by Delilah S. Dawson started so bad, I almost quit. But it got better–much better.

Nice cover art. I don’t see a credit for it, but it’s good.

Book Review: Riley Unlikely: How One Young Woman’s Heart for Africa is Changing the World, by Riley Banks-Snyder with Lisa Velthouse

“If anything has become clear to me … it’s the link between love and craziness.”

This is an awesome book. Not only is the subject a great, true story, but the writing is genuine. The voice sounds like a real person–a poised, enthusiastic young lady who is as amazed as anyone else at what a couple weeks in Kenya changed her life … and the lives of hundreds of American and Kenyan children.

“A pencil could be a source of fulfillment and deep satisfaction.”

A fast read; a fun read. Hard to put down. Ups and downs and twist like an adventure novel. It was/is an adventure story, but it’s true. It feels authentic, even as readers follow Riley on her unlikely journeys–literal and figurative.

“His response to my doubt is not punishment; it was unmistakable grace.”

A note about “with.” Co-authors, ghost writers, whatever you call them seldom get credit for what they do. Lisa Velthouse managed to capture the enthusiasm and personality of Riley Banks-Snyder. Extraordinary young lady; extraordinary book.

Book Review: 70 and Proud of It, Summersdale

“Birthdays are good for you. Statistics show that the people who have the most live the longest.”

Short epigrams from famous, not-so-famous and anonymous sources, relating to age and aging.

“The great things about getting older is that you don’t lose all the other ages you’ve been,” Madeleine L’Engle

Popcorn for the brain. A decent topical birthday gift, which is how I came by this copy.

“You are never too old to set another goal or to dream a new dream.” C. S. Lewis

Book Review: The Third Eagle by R. A. MacAvoy

“Ten years climbing a ladder to find nothing at the top.”

A young man who lives in a niche of a niche culture, chucks all aside one day and leaves: leaves his job, his home, his planet. Unprepared? Does being a galaxy-class martial arts expert count? Some.

“Hearing his death described as inevitable moved Wanbli not a whit. Everyone’s death was inevitable.”

“A duty once assumed is a duty to the end.”

My favorite Cadfael story. All the elements familiar to Peters’ readers–death, mystery, and sleuthing set amid a historic civil war, medieval culture, Welsh borderlands, and young love; but Peters mixes the ingredients a little differently this time.

“To me he has been all the sons I shall never father.”

Peters’ best investigation of what constitutes a life well lived. A man returns from the Crusades, as had Cadfael himself, to retire from the world into the Benedictine order. This noble is also ruined of body. As he fades, those around him seek to ease his earthly and emotional burdens, including the disappearance of his espoused bride three years previous.

“His spirit outgrows his body … there is no room for it in this fragile parcel of bones.”

Murder mysteries all involve death. Or do they? Yes, someone dies here, but was someone murdered three years previous? Why? Where? How? And most important END_OF_DOCUMENT_TOKEN_TO_BE_REPLACED

“All because he stole something that should have been his to start with.”

This is historical fiction as it ought to be written: a vivid portrait of the times woven from many factual threads as well as period appropriate people and ideas. But this is no history, rather an engaging, enjoyable fiction. Each chapter opens with an epigram from some primary source draw from letters or journals of that time. The story also explores the lot of the common soldier encamped at Valley Forge, Pennsylvania that brutal winter of 1777-8.

“My humors fell out of balance, and I became tetchy and sour-minded.”

The voice of the protagonist, a young black male fleeing from slavery and joining the fight for American independence, sound authentic. Written to simultaneously capture the attention and persuade young readers.

“Even from his grave, Father could be an annoying fellow.”

A fictional treatment of American slavery risks either sugar coating what was an awful reality or demonizing everyone and everything involved. Anderson draws a clear line against slavery while exploring the varying attitudes and justifications of that day.

“The land which we have watered with our tears and blood is now our mother country.”

A good, standalone read, even though it is the sequel to Chains.

“If our luck does not turn for the good on its own,” she said, “we’ll make it turn.”

The Dirty Dozen long, long ago, in a galaxy far, far away.

Good job. Good independent story with good tie-ins to Star Wars series. Almost anything I say will be a spoiler. Don’t read any synopses.

Loved the atmospheric quality of scenes set on planetary surfaces.

Caveat: This is a combat movie. The intensity of some scenes would be inappropriate for children, even/especially those who have seen other Star Wars movies and think it’s more of the same.

Inevitably, we compare it with both The Force Awakens and the six Star Wars movies. In summary, it’s different; it’s better. For loyal Star Wars fans it has many hooks to the greater story, especially to The New Hope (Episode Four, the original movie), as it grew from a line in the opening scroll of that movie. It’s also its own movie, with its own, though related music, book ends, and tone. It’s still set in that galaxy struggling between good and evil.

Part of what make this movie and most Star Wars stories connect to viewers is that they feel real. They take the viewer into the epic struggle each of us has with his own life. They are stories of dreams, challenge, self-sacrifice and redemption. They touch something deep inside us. Something not satisfied with the flash and cynicism of most Hollywood offerings. It’s not that these stories are true, but that they resonate with the truth in each of us.

“A bright, tenacious flower will not bloom in obscurity.”

Both the book and the author demonstrate the potential for greatness, as reflected by its winning several notable awards. However, despite being over six hundred pages, it feels rushed. Liu tries to create a world and fully develop all the players in a major turning point of history. He almost succeeds.

“All the works of men must be trivial in the fullness of time.”

Medieval culture on cusp of industrial revolution, geography like Japan though the culture seems more Chinese, I’ve heard it called silkpunk. As in Homer, the gods exist but don’t directly act. They meddle as forces of nature and impersonations of common people.

The underlying thesis is that conflicting views of reality, values, and perceptions lead inevitably to conflicts. Common enemies may produce common goals, but even those you love are END_OF_DOCUMENT_TOKEN_TO_BE_REPLACED