“Is this what it’s like when they pine away after us?” “We are not pining!”

Slightly ribald version of the shaggy dog story. Riotously indirect. I’ve already told you too much; read it. (Cover art is Uncanny Magazine 25, November-December 2018, in which the story appears.)

“I’ll tell you all about it when you’re older.” She paused, looking down at the stubborn little face. “Much … much older.”

Possibly the best story Brandon Sanderson has written. Yes, I know. Better than most of his adult fantasy. Written for young adults, but will engage many readers.

“It’s not your fault you’re a bloodthirsty ball of aggression and destruction.” “I am?” I perked up. “Like, that’s how you see me?” She nodded. Awesome.

Sanderson mostly tells the story from deep inside the head of his protagonist: Spensa. She has a great inner voice. But key scenes include other points of view which increase rather than diminish the conflict.

“I’d always assumed that when I made it–when I finally got here–I’d stop feeling so afraid. But maybe, deep down, I was … worried.”

Your typical Harry Potter/ Top Gun/ Lord of the Rings gathering of misfits, who train, grow and bond, but END_OF_DOCUMENT_TOKEN_TO_BE_REPLACED

“The world has its own mysteries. We only begin to understand what they are after they’ve already passed.” “That’s a very quantum thing to say.”

“I’ll provide you moral and spiritual guidance.” “That sounds pointless, as I don’t have a soul. I’m simply trying to help you achieve your goals.” “You have a soul. I’ve been watching you for years. Your problem is your soul is torn in two.”

What an ensemble cast, including a saint! If I tell you, it spoils the fun. Not all homo sapiens, but very well drawn.

“You were giving me a line in my chapel, about this being fated. You meant to con me, but you were telling the truth.” “I said it because it was meaningful to you, like my nonexistent soul. Just because neither exists to me doesn’t mean they don’t exist for you. I’m homo quantus; I live in an observer-dependent world where very important things can exist and not exist at the same time.” “Somethings exist whether you believe them or not, including meaning.”

“The book form has more explicit swearing that the Analog Magazine editor and I cleaned up for the serialization because Analog circulates in some high schools,” Künsken wrote on Goodreads.com. I’m with the editor; too much gratuitous swearing. Cost him a star.

“Are we going to get killed?” she whispered.  “Saint Matthew is piloting. They’ll know what we did, probably in less than an hour. By then, we’ll have vanished.” “Like a magician?” He smiled. “A little bit.”

Book Review: “The Citadel of Lost Ships” by Leigh Brackett

“Now the Kraylens were going the way of the others, straws swept before the great bloom of Progress.”

First published in 1943, this story reads well today, despite some anachronisms. Good plot and character development without data dumps and preaching. Yes, vintage SF authors were just as pulpit-prone as moderns. Brackett was sensitive to minority and native population rights.

“But Romany will be happier.” “We don’t ask to be happy. We only ask to be free.”

Some anachronisms: wooden ladder, cigarettes, the protagonist’s attitude toward the female lead. The idea that Venus might have a hot, wet atmosphere was common to older SF writers, just like canals on Mars long after we knew better.

“They take us and place us in camps in the great cities. Small groups of us, so that we are divided and split. We will die first.”

Trivia: Bracket wrote the first draft of Empire Strikes Back just before she died.

“Why do earthmen have to change everything they lay their hands on?”

“The soul can be lost but once.”

This story introduces the one tor.com calls, “the first lady of sword-and-sorcery, Jirel of Joiry … in all her ferocious mailed glory and defiance.” Very dark, almost horror. Not my kind of reading, but exceptionally well done, especially considering it was first published in 1934. Stories like this established Moore among the top tier of science fiction/fantasy writers.

“Shrive me, I say! I go into hell tonight to pray to the devil for a weapon, and it may be I shall not return.” “I will give you God’s blessing, but it will not avail you–there.”

Unlike later fantasy, the Jirel stories are firmly planted in this world. References to the former Roman empire and French wine, while slightly anachronistic, set Joiry somewhere in medieval Europe. Moore also takes the church as it would have been then as a given to Jirel’s culture.

A third of a century before men walked on the moon, Moore correctly posits the dance-like gait of one moving in low gravity. Prescient? No, smart and observant.

“She was coming to know that death lay in wait for her if she bore this burden long, that it was a two-edged weapon which could strike at its wielder if the blow was delayed too long.” 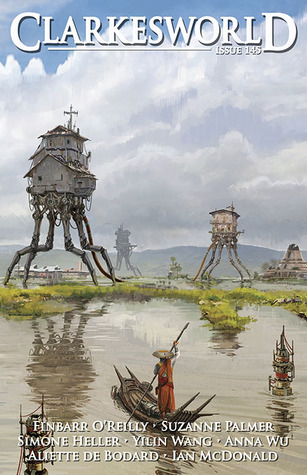 Book Review: “When We Were Starless” by Simone Heller

“We didn’t change a thing, and all our sacrifices were just to survive another day. It was enough, mostly, as long as we pretended it didn’t tear our hearts out.”

“We can’t afford to believe in comfort. There’s only blackness.”

Excellent. Packs a bunch of storytelling into just a few pages. Bright and tight.

“If the winds are willing and you’re keeping us safe, I’ll eat the stuff that’s trying to eat me.”

Heller builds her world through the eyes of her protagonist. The reader learns Mink’s troubles and hopes–and those of her adopted tribe–as she experiences the. Good job.

“You deny me my contribution to our survival, just because you’re too sappy to accept what has to be done.” He might still get his chance to die alone.

Cover art is from Clarksworld October 2018 magazine, in which this story appeared.

“Just remember, beyond the blackness, worlds are waiting.”

Book Review: Seven Days: The Emergence of Lee and the Dawn of a Legend by Clifford Dowdey

“McClellan was in fact the most modern of generals then active: he was an executive. His talents were m [sic] organization and administration. But, as a general, McClellan hated to go near a battlefield.”

Most students of history know that George McClellan almost won the Civil War in the spring of 1862. This book explains why … and why not. A monumental effort, involving tracking every major unit of both armies, often with biographies of commanders down to the brigade level. Weather, ordnance and rations are detailed.

“The next day the guns in the unfinished fort at Drewey’s Bluff, turned back the James River fleet of the U. S. Navy, nowhere in the war did so few accomplish so much in significance of the course of the war followed.” (Did you know? I didn’t, but END_OF_DOCUMENT_TOKEN_TO_BE_REPLACED

Book Review: The Only Woman in the Room by Marie Benedict

“Another performance. I figured I would find a way out. But the Hedy I truly was underneath all the external playacting had developed real feelings.”

I read–and am reviewing this–as historical fiction, not a biography. As such it’s excellently composed and written. Using a first-person point of view Benedict takes us deep into Hedy Kiesler/Lamarr’s mind, thinking thoughts that we (and she) have no way of knowing whether Hedy thought, based on her decades of seclusion before her death in 2000. If Benedict had sources for such speculation, she didn’t mention them. Most of the facts reveal Wikipedia-depth research.

“You’re not a Jew, are you?” “No, of course not, Mr. Mayer,” I answered quickly. What else could I say? If my survival in this new life depended on lies, then lies it would be. I was no stranger to them.”

Benedict’s thesis: Hedy was rejected because a woman. Yet fellow inventor (and well-connected) Howard Hughes loaners her facilities and help; why did she not END_OF_DOCUMENT_TOKEN_TO_BE_REPLACED

Book Review: “The Tale of the Three Beautiful Raptor Sisters, and the Prince Who Was Made of Meat” by Brooke Bolander

“To see it would have burst your heart, and then they would have eaten what was left of you.”

Something of a farce. Fun to the point of being silly. Like a one-line joke extended into a story.

“Glamour never worked on cats. They saw right through the Princess’s spell, recognized the kindred hunters beneath, and found pressing reasons to be elsewhere.”

“’There’s a real live girl with me on this ship.’ Few thoughts had ever filled him with so much terror.”

Reads like a throwback to the Golden Age of science fiction. Short, young-reader innocent, reflecting values of fifty years ago. Well done.

“You sure make better company than the stars.” “Stars.” “Yes, stars. That’s good.”