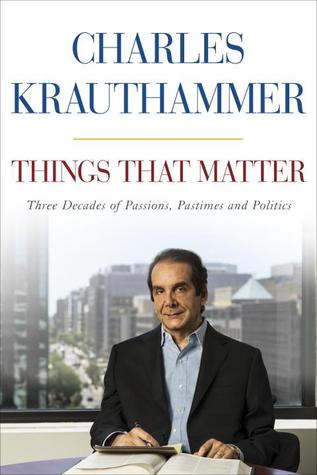 An entertaining collection culled from thirty years of columns and speeches. Naturally, whether one agrees often or at all will reflect one’s personal orientation, but Krauthammer expresses his opinions well.

“Peace: noun, in international affairs a period of cheating between two periods of fighting.” Ambrose Bierce

Krauthammer is a token conservative on the Washington Post and often a talking head on NPR and FoxNews.

“Deterrence doesn’t work against people who ache for heaven.”

Hard to respect anyone who thinks baseball–either played or watched–is anything other than a monumental waste of time.

Silly movie, which is what we hoped for.

See it. With or without children.

Book Review: The Holiness of God by R. C. Sproul

“Our marks of piety can actually be evidence of our impiety.”

Disappointing for a supposed classic of theology. Expected better from R. C. Sproul. An important topic for Christians. Even given Sproul’s well-known Calvinist orientation, his writings betray poor scholarship and bias. Good discussion of meanings of original texts, such as the same word being translated as truly and pray.

“The justice of God is always and ever an expression of His holy character.”

His theological gaffs are funny. He reports Romans 8 “renew the mind” means “nothing more and nothing less than education.” He tells us “we are called to strive with all our might to produce this fruit [of the Spirit].” Strive? He reports to “make decision” to be born again is a “delusion.”

“Don’t ever ask God for justice–you might get it.”

The above errors can be excused as partisan politics (yes, theologians do it), but his attempt to discredit Arminian theology by labeling it semi-Pelagian is disingenuous. Masking the Arminian versus Calvinist dichotomy under different labels does nothing for Sproul’s credibility.

Despite all that this text has many good thoughts and arguments.

“Almost every natural man that hears of hell, flatters himself that he will escape it.” Jonathan Edwards

The best kind of war movie, one that focuses on human-sized stories without losing track of the big picture. Historical fiction, but incredible realism and drama. Multiple viewings necessary to absorb the depth.

Only criticism is the folded timeline. Nolan not only cut back and forth between plot lines, but breaks chronology. The attentive viewer sees the same event as many as five times from the point of view of five different characters. It adds depth to the story, but it often knocks the viewer out of the flow trying to figure out when and where we are.

“Not only could a man’s eyes mislead him but his mind could deceive him as well.”

Gripping historical fiction about New York City 110 years ago, though it reads like a fantasy set in another world. Hoffman weaves the lives two strangers to each other between the opening and closing historical horrific fires. Her historical details are exhaustive and apparently correct.

“To find someone, it was necessary to follow … the way that angels follow men’s lives on earth are said to do, chart each trespass without judgement, for judgement is never ours to give.”

Lots of stereotyping by gender, ethnicity, class, and religion–the easy route to character building. She seems sensitive to conditioned inferiority, though in my experience everyone feels inferior about something.

“He wondered if every criminal saw himself as the hero of his own story, and every thankless son convinced he’d been mistreated by his father.”

Hoffman’s plot involves Anglo-Saxon antagonists, but the real villains of the Triangle Shirtwaist factory fire were the owners, who were Russian immigrants just like the many casualties. Sometimes the worst crimes are committed by those we think of as “us,” yet we give them a bye in our rush to blame others, who are conveniently “them.”

“I had thought my father could work miracles. But I was wrong. He could only possess them.”

Quibbles: The male protagonist is reported to be 6’2” at age thirteen, despite a childhood of poverty. The first-person chapters are Italicized. Hard to read, though it alerts the reader to potential unreliable narration.

“As he slept he prayed that no one would wake him, for it was in dreams that a man found his truest desires.”

“Like every good man. He, too, has failed. He knows what it means to be a human being.” “To be a failure?” “To forgive. As he has forgiven you.” 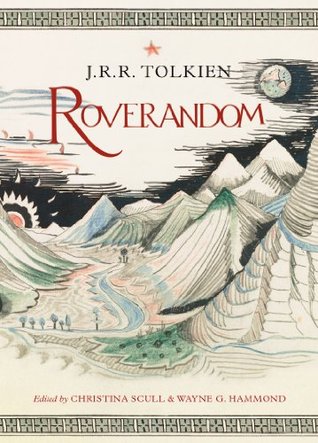 “You never know what will happen next, when once you get mixed up with wizards and their ‘friends.’”

This is a story for children, specifically for Tolkien’s children motivated by the loss of a toy. More than that will spoil the telling. It’s oral tradition started long before any of his published works, though traces of Middle Earth can be gleaned from reading this final text.

“…on the stomach (where dragons are particularly tender.)”

It’s more profitable to compare this story with Farmer Giles of Ham in The Tolkien Reader and Smith of Wootten Minor, not The Hobbit or Lord of the Rings. Violates some of the very principles he would elucidate within the decade in his address “On Fairy Stories” in The Tolkien Reader.

“…and saw off in the last West the mountains of Elvenhome.”

A fun read, and a rare look into the developing talent of one of the greatest story tellers of the twentieth century. This edition is fully annotated to help modern readers fully appreciate the tale.

“…as quick as kiss your hand.”

“Place names are trivial. It’s the meaning we attach to them that counts.”

At some point successful authors conclude they can sell books based on their name rather than the content. Apparently Clive Cussler reached that point when writing this book. It is the kind of fast-paced Indiana-Jones-type adventure readers expect from Cussler, with all the technobabble and product placement appropriate to the genre.

I’m sure Grant Blackwood is a capable person, but someone should have proofread the text. It is rife with howling non sequiturs, of which a few are offered: “razed to the ground,” “cantering slowly,” “a sheaf of blueprints,” and “a scientist by nature and training” (both in 1677). My favorite paragraph included: “The single-engine Piper Cub …. Sitting on opposite sides of the aisle…. The engines began to wind down.” And that doesn’t touch the logical and plot contradictions.

“We won’t stumble into the hands of [redacted], I can assure you.” We know what will happen next.

It may seem odd to review a book of songs, but I’ve been using it as a daily devotional guide. Works.

I first became aware of this book, originally published over a hundred years ago, sixty years ago. In a small Kansas church which had dozens of old copies. Every Sunday for several years we’d sing these simple songs of the faith accompanied by an old piano. (Okay, everything about this was old then, except me, and I’m old now. You’ve got that.)

I obtained this copy recently and started through it in order: singing (to myself) the hymns I knew, reciting the others as poems. I was surprised that I remembered more than half. Some in this edition weren’t in the 1938 edition we used then.

It has much to recommend itself. Including the responsive scripture readings, which at the time I was so focused on saying the words in unison that I paid no attention to what I was saying.

A window, for me, into my youth and early life.

“The unexpected is what makes life possible.”

“Almost anything carried to its logical extreme becomes depressing, if not toxic.”

Better introduction than Le Guin’s Words Are My Matter. Read this; not that.

“The whole tendency to dualism that pervades human thinking may be found to be lessened, or changed on Winter. On Winter … one is respected and judged only as a human being. It is an appalling experience.”

Le Guin reminds us that the issue is not being manly men or feminine women–nor fem men and manly women, or whatever–but being totally human. Modern politics END_OF_DOCUMENT_TOKEN_TO_BE_REPLACED

From the July 12, 2017 Wall Street Journal: “VISA has a new offer for small merchants: take thousands of dollars from the card giant to upgrade their payment technology. In return, the businesses must stop accepting cash.”

Last time I checked cash was “legal tender for all debts, public and private.” How can a business not take cash?

I have a VISA card, but I pay for most of my purchases in cash. Helps keep me from over spending, which would be fine with VISA. They want me to overspend.