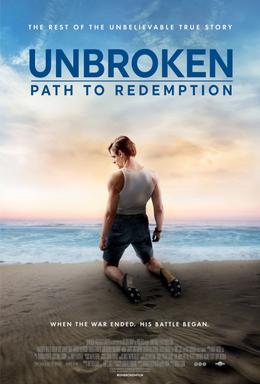 The rest of the story. The 2014 film Unbroken relates the World War Two service and prisoner of war experiences of Louis Zamperini. This movie tells of his struggles after the war. Both are based on Laura Hillenbrand’s book: Unbroken: A World War Two Story of Survival, Resilience, and Redemption.

“In the prison camps they tried to take your humanity, and you wouldn’t let them.”

Over 85% of World War Two prisoners of war in the Pacific theater suffered from Post-Traumatic Stress Disorder, which was not then recognized as a specific disorder until 1980.

“God often uses difficulties in our lives to prepare us for a greater future.”

The movie, like the true story, is unabashedly Christian, but it is not END_OF_DOCUMENT_TOKEN_TO_BE_REPLACED