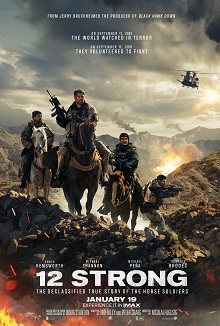 “Your mission will fail because you fear death.”

An old-fashioned war movie, based on the incredible true story of America’s first strike back after 9-11. The most engaging depiction is that of General Abdul Rashid Dostum, now vice president of Afghanistan. (All the quotes surrounding this review are by his character. There are as many quotable ones by the American characters, such as, “The only way home is winning.”)

“You have many men over you; I have over me, only God.”

Extremely violent. Much of the violence is bloodless, but much is very bloody. Ten percent shorter would have been ten percent better. The men who were there say END_OF_DOCUMENT_TOKEN_TO_BE_REPLACED