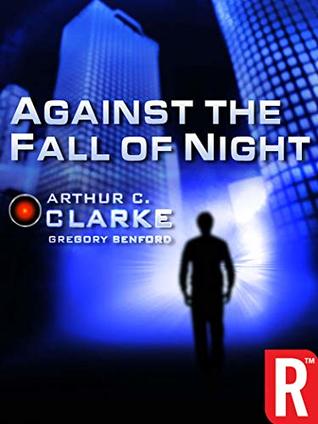 Book Review: Against the Fall of Night by Arthur C. Clark

“Quivering in the air above the base of the fall was the last rainbow left on Earth.”

A science fiction classic first published as a novella in 1948, revised and expanded several times in the 1950s. The opening scene was written in 1935. A good story, well written, and it stands up well despite it’s age.

“It was waiting, waiting for the veil of the past to be lifted again after … more than fifteen hundred million years.”

The biggest fallacy is the supposed setting billion years in the future, yet so little changes. These guys were big believers in evolution except when it interfered with their stories. Considering when it was written, the text contains few of the errors of modern SF.

“Already, in a few months, the Present had changed out of all recognition—and now they were going to lose the Past.”

Clarke explains: “I was also to discover the lines of A. E. Housman that not only described the locale perfectly, but also gave me the title of my first novel: ‘Here on the level sand, between the sea and land, what shall I do or write against the fall of night?'” (Wikipedia)

“It is lovely to watch the colored shadows on the planets of eternal light.”

1 thought on “Book Review: Against the Fall of Night by Arthur C. Clark (Three Stars)”