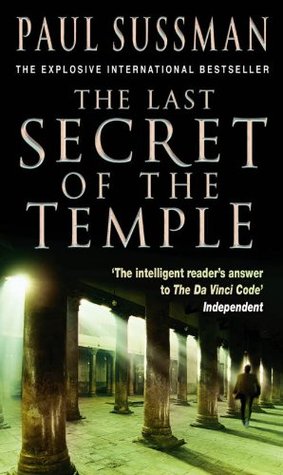 Book Review: The Last Secret of the Temple (Yusuf Kalifa #2) by Paul Sussman

“That’s the problem with the past, isn’t it? It’s never really past. It’s always there. Clinging on. Like a leech. Sucking out the blood.”

“Columbo” does “Raiders of the Lost Ark.” Great, if derivative, concept.

If the golden menorah fashioned in the Sinai Wilderness still exited in 70 AD or 2005, it would be all that Sussman advocates, but not if it was probably carried off with everything else into the Babylonian captivity, circa 587 BC. That a menorah was present during the Hellenistic and Roman period is attested to by multiple sources, not the least of which is the representation of a menorah on the Arch of Titus in Rome being carried off by Roman as loot. It stands in the middle of Emblem of the State of Israel.

“Always go towards what you fear, Zenab. And always seek out what you don’t understand. Because that is how you grow and become a better person.”

Sussman skillfully weaves ancient and not-so-ancient history into modern archeology and politics to form a complex mystery. That his principle protagonists are Egyptian, Palestinian, and Israeli sets the stage for many conflicts and misunderstandings.

‘Is it worth it, I ask myself? Is it worth all the trouble for someone like that?’

Quibbles: Sussman’s constant telegraphing his next hit betrays a low opinion of his readers. Examples: ‘Actually, there was one thing …’ and ‘What?’ ‘One thing … it may or may not be significant.’ Despite his assumed visiting the sites of the story, several orientations are wrong. Gratuitous profanity—way beyond the overused f-word.

“Do good things. Try to make a difference.”

2 thoughts on “Book Review: The Last Secret of the Temple by Paul Sussman (Three Stars)”