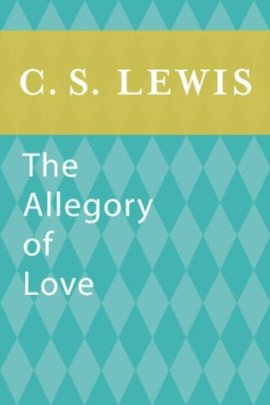 Book Review: The Allegory of Love by C.S. Lewis

Reader beware. This book was probably C. S. Lewis at his worst: an academic tome written in 1936 about his day job, long before he’d reached his peak as a communicator.

It traces the rise and decline of the love allegory as a mainstay of European literature in the late Middle Ages. I read it to mine the nuggets of Lewis wisdom scattered through the dry strata of Latin, Greek, French and Middle English. The footnotes, when they weren’t the usual op. cit., lop. cit., and ibid. silliness, were even in Latin and Greek. (No, I don’t read those languages. Paradoxically, it only slowed rather than prevented understanding.) Try this sample of Middle English, now often found on old tombstones (sound it out; it’s not so bad as it looks):

O mortall folk, you may behold and se
How I lye here, sometime a mighty knyght.
The ende of Joye and all prosperite
Is dethe at last through his courses and myght;
After the day there cometh the derke nyfght,
For though the day be never so longe
At last the belles ryngeth to evensonge.

Progress was slow and something of a love-hate affair. In addition to the nuggets identified below, I also found myself appreciating, if not understanding, a realm of literature which had been a closed book to me. Courtly love, as we all think we know, is the adulterous love of a knight for his chosen lady. Love within marriage was discouraged by church and fashion in the Middle Ages. The allegorical romances Lewis reviews were encyclopedic works which were both practical guides to wooing as well as cosmologies of nature as it was then understood, which was pretty poor. It even added to my understanding of how people then incorporated the works of Plato and Aristotle in their systems of knowledge.

Some gems of wisdom include the following: “All men have waited with ever-decreasing hope, day after day, for someone or for something that does not come, and all would willingly forget the experience.” “Potential genius cannot become actual genius unless it finds or makes the Form it requires.” “The mind posits in the past the desired thing which is really still in the future.” “When Catholicism goes bad it becomes the world-old, world-wide religio of amulets and holy places and priestcraft: Protestantism, in its corresponding decay, becomes a vague mist of ethical platitudes.” “Each of [Spenser’s] deadly sins has a mortal disease.” “Truth and falsehood are opposed; but truth is the norm of truth but of falsehood also.”

The last quote is found in the midst of Lewis’ analysis of Edmund Spenser’s The Faerie Queene. The larger context is that most of the apparent dichotomies of good and evil, light and darkness, justice and injustice are not equal and opposing realities but the opposition of a diseased, crippled, decayed version on the one. Light is not an absence of darkness; darkness is an absence of light. (Ask any physicist. The same with hot and cold.) I haven’t worked out all the implications, but this set my mind buzzing. And isn’t that why we read?

Another theory I propose is that avid readers of Lewis and J. R. R. Tolkien need look no further than works like this to find philosophic underpinnings of Narnia and Middle Earth. The former certainly reflects the lessons of courtly love and honor Lewis explores in Allegory, and the latter is founded on Tolkien’s studies of Anglo-Saxon and Old English, such as Beowulf: A Translation and Commentary, together with Sellic Spell.

This work opens a world as different to us as the wildest science fiction or fantasy of Lewis and his friend and colleague Tolkien. A world where people believed, thought, and acted differently than ours. “The deepest of worldly emotions in this period is the love of man for man, the mutual love of warriors who die together fighting against odds, and the affection between vassal and lord.” Lewis directly addressed the differences in his The Discarded Image: An Introduction to Medieval and Renaissance Literature, well worth the reader’s time and imminently more readable.

The wary reader might wish to try only Chapters 3 and 7, The Romance of the Rose and The Faerie Queene, but I warn that you may not understand either without the necessary background.

Why five stars? Because this book has sparked new thinking about life and the world. What more could we want from a book?