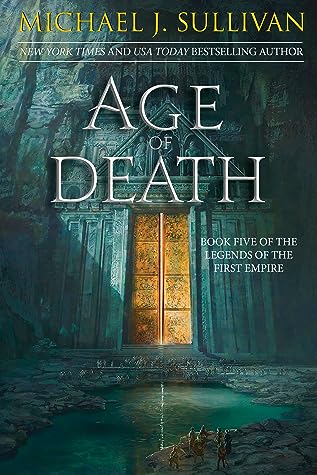 Book Review: Age of Death (Book Five of the Legends of the First Empire) by Michael J. Sullivan

Another chronicle of the first empire in the world of Elan. This tale is rich in deep backstory as Sullivan starts connecting the dots for the coming climax. There’s no ending, no closure, just a big fat cliffhanger at the end. No, several cliffhangers.

“I thought life was misery because of the unending succession of trials and tribulations. But now, I see that challenges are what life is all about.”

I’m good with Sullivan’s decision to expand what was to have been a five volume series into six. Though I dislike cliffhangers, they are logical places to divide the story.

“Education is never without cost; all the truly valuable lessons leave a scar.” The Book of Brin

Spoiler Alert: Do not—I repeat, DO NOT– read Robin Sullivan’s Afterword. She reveals a secret Michael has not. In fact, it’s one of the continuing teases of the entire series.

“This war won’t be won or lost by birds or dragons, nor by greed or hate, but by the courage and virtue of an unlikely few who will forfeit everything to save the future. That’s how it works, you know? The proud, the greedy, the vengeful are never the ones to change the world—not for the better, at least. They can’t.”