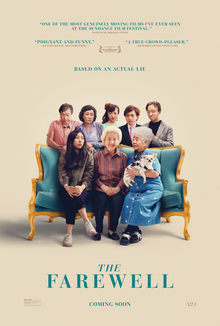 Movie Review: The Farewell, written and directed by Lulu Wang

“Based on an actual lie” semi-autobiographical movie about a Chinese American dealing with her paternal grandmother’s terminal illness.

High-quality production despite the obvious small budget and lots of on-site filming in Changchun, China. Much tension and comedy as family gathers from America and Japan for a cousin’s supposed wedding.