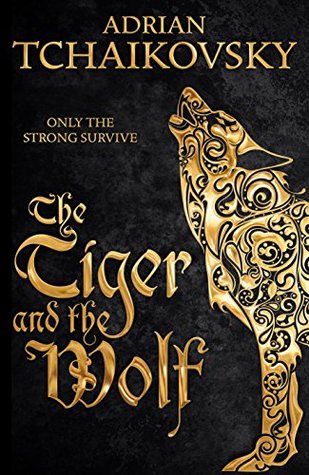 Book Review: The Tiger and the Wolf (Echoes of the Fall #1) by Adrian Tchaikovsky

“Believing in freedom was just a knife the girl had made and given to the world to cut her with.”

Editing could have improved it. Not tight and bright. Wordiness is okay to describe inner dialogue and conflict, but it slows the narrative. Repetitious, too. “When the attack came …” occurs three times.

“Ill fortune dogged the oath-breaker, just as it would the treacherous host, the ungracious guest, the kinslayer.”

Quibbles: “peat-clad roofs” Sod-clad? “saw the fires begin to gutter” Candles gutter, not campfires. Characters change size as well as shape. As they go from one state to another, they shed all fatigue from the previous state. A conservation of energy and mass would have improved credibility. (Who worries about credibility in fantasy? Attentive readers, even if they don’t know it.) Two characters are named Maniye and Amiyen. Too similar for easy reading.

“A slave?” “Slave with no collar’s still a slave.” “Of all the slaves in the world, you are the least satisfactory.” “There are worse ambitions.”

“The Wolf hunter shrugged, suggesting that neither he nor the world were there simply for her to understand.”

1 thought on “Book Review: The Tiger and the Wolf by Adrian Tchaikovsky (Four Stars)”