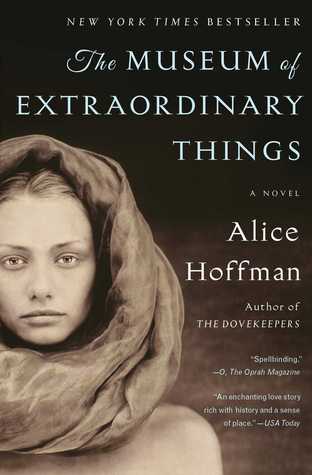 “Not only could a man’s eyes mislead him but his mind could deceive him as well.”

Gripping historical fiction about New York City 110 years ago, though it reads like a fantasy set in another world. Hoffman weaves the lives two strangers to each other between the opening and closing historical horrific fires. Her historical details are exhaustive and apparently correct.

“To find someone, it was necessary to follow … the way that angels follow men’s lives on earth are said to do, chart each trespass without judgement, for judgement is never ours to give.”

Lots of stereotyping by gender, ethnicity, class, and religion–the easy route to character building. She seems sensitive to conditioned inferiority, though in my experience everyone feels inferior about something.

“He wondered if every criminal saw himself as the hero of his own story, and every thankless son convinced he’d been mistreated by his father.”

Hoffman’s plot involves Anglo-Saxon antagonists, but the real villains of the Triangle Shirtwaist factory fire were the owners, who were Russian immigrants just like the many casualties. Sometimes the worst crimes are committed by those we think of as “us,” yet we give them a bye in our rush to blame others, who are conveniently “them.”

“I had thought my father could work miracles. But I was wrong. He could only possess them.”

Quibbles: The male protagonist is reported to be 6’2” at age thirteen, despite a childhood of poverty. The first-person chapters are Italicized. Hard to read, though it alerts the reader to potential unreliable narration.

“As he slept he prayed that no one would wake him, for it was in dreams that a man found his truest desires.”

“Like every good man. He, too, has failed. He knows what it means to be a human being.” “To be a failure?” “To forgive. As he has forgiven you.”