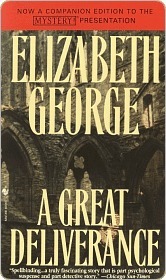 “A vestige of time dead, being devoured by time to come.”

Lord Peter Wimsey rides again, sort of. An updated lord-as-sleuth tale with a grittier approach than Dorothy Sayers original from the 1920s. This series, from the 1980s, reflects more modern times, but still the quintessential England of literature and music as much as manors and manners. Not at all a Holmesian tale; much more personal and pyshological. (One hopes the BBC didn’t rape these as they did the Cadfael mysteries.)

“The police were antagonists to be thwarted rather than allies to be helped.”

Deep, complex characters. Everyone has a skeleton, if not a demon, in his or her closet. This book takes the reader deep inside the heads of just about everyone as New Scotland Yard investigates a horrific crime in Yorkshire. (I visited the Yorkshire dales in the late 80s, George’s good descriptions fail to express the bleakness and the beauty. Words fail.) This book is not for the timid or weak stomached. That more than one character vomits is appropriate and realistic. (You’ve been warned.)

The accents and vocabulary are a bit over-the-top, especially of the Americans, who I’m sure are portrayed just as most British viewed us then. George occasionally slips: “Bob’s your uncle” is not an expression Americans would use.

“The whole situation was an irritating, howling, political maelstrom of thwarted ambition, error and revenge. He was sick of it.”

Americans forget–more likely never knew–that England in the 1980s (when this book was written) was more socially divided that the United States today. Margaret Thatcher’s election set off a cultural war the likes of which we are just now seeing here. English were (I lived in Oxfordshire in the 1980s) much more class conscious. The attitudes expressed by Sergeant Havers were typical of commoners then. English gender attitudes are integral to the plot as well.

“Mothers have a way of taking things a bit personally. Haven’t you noticed?”

The text suffers jarring shifts in point of view, which perhaps were caused or exacerbated by formatting issues. Apparently this edition is an optical scan of the original text; numerous errors have slipped in. (“Shell stand that,” when “She’ll stand that” was obviously meant.) Do all English call speakers amplifiers? As in, “Enormous amplifiers sat in all four corners, creating at the center a vortex of sound.” (I know what council houses, boots and dust bins are; not what Americans think.)

Great writing. Great characterizations. Intense drama and conflict. But also a story of courage and compassion. Quite the climax, and yet plenty gaps are left in our knowledge of Havers and Lynley to engage the reader in his further cases. Looking forward to more.