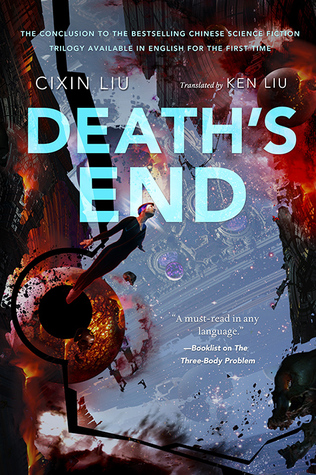 “In the end, the real power is wielded by time.”

Loved it. As usual with Liu’s books, took a couple hundred pages for the story to get traction, but once it’s out of the station this train builds lots of momentum.

“Twice … she passed the world into the abyss in the name of love.”

Main character is so flawed in a Sesame Street-way that you can’t help loving her–even as you yell at her for her stupid decisions.

Lots of Quibbles: 1. Europe is not “on the other side of the Bosporus” from Istanbul. 2. Peacekeeper missiles were decommissioned in 2005. 3. “Known universe is 16 billion light years across.” It’s more like 91. 4. Enormous engineering in space with “no drain on earth resources or economy.” Can’t. It’s the old “guns vs. butter” choices of economics. 5. “Coasting at light speed” they cover 278 light years in 52 hours? 6. The sun “just” went out? It’ll take 277 years for the last light of the now-extinguished sun to reach their new location.

“Half a century ago, we walked on the moon. But now, we have nothing.”

“Because the universe is not a fairy tale.”

A good, serious investigation of how dangerous a place the galaxy may be as well as examining death as the great leveler of people and solar systems. Several of the dialogues bordered on “As you know, Bob …” data dumps, but still good stuff.

“When humans are lost in space, it take only five minutes to reach totalitarianism.”

Wanted to give five stars. It’s good, just not quite that good. I wanted it to be shorter and longer simultaneously. Will look for more Liu’s work. He’s really, really good.

“Weakness and ignorance are not barriers to survival, but arrogance is.”