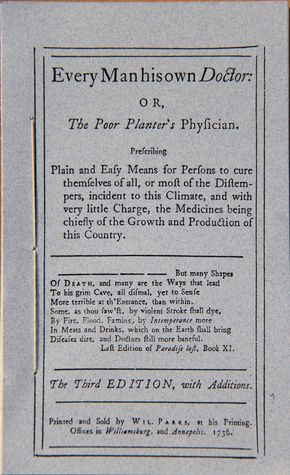 Book Review: Every Man his own Doctor, or, The Poor Planter’s Physician  by John Tennent

This 1737 guide to home medicine was widely available and followed in colonial times. Benjamin Franklin is reputed to have been among its printers and distributors. The book offered a cure for everything from “vapours” (“Hysterick fits”) to cancer.

Medicine in that century could only deal with symptoms, because true antibiotics–indeed the germ theory of diseases–was in the future. Sometimes getting symptoms under control and letting the body heal itself sufficed, other times not. A disturbing number of treatments including repeated blood letting.

For example: To prevent “consumption” (tuberculosis) “never suffer a cough to dwell upon you; but bleed in time, and purge gently once a week. In the meantime, eat not one morsel of meat, nor drink anything stronger than a little sound cider: And to make the game sure, ride every fair day, and breathe as much as possible in the open air.”

Entertaining, if gruesome. (I read it researching a Revolutionary War historical fiction.) I think our medical care is better now, though some of the home cures you see on Facebook make you wonder. Thank God for antibiotics and vaccines.