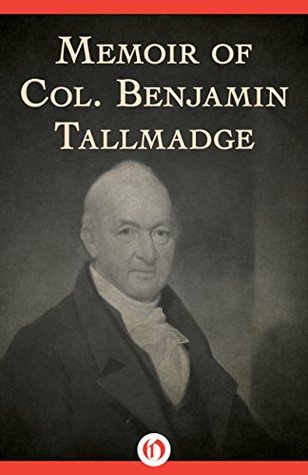 “I soon left the paternal abode and entered the tented field.”

As a student of history I love primary sources. What letters and journals of participants suffer in bias they make up in immediacy. Colonel Benjamin Tallmadge was a Revolutionary War hero, known to viewers of AMC’s TURN: Washington’s Spies as Washington’s spymaster. (They got that much right.)

His brother along with thousands of other captured Americans “… perished in prison by severe usage, sickness, etc.”

He was also a participant in most major and many minor military actions in and around New York City throughout the war. Though these memoirs were written forty years after the fact, they provide a literate (Tallmadge graduated from Yale in 1773) record of American leadership and battlefield fortunes.

“At this time a very dense fog began to rise … I recollect this particular providential occurrence perfectly well.”

Twice Tallmadge recounts events as evidence of ‘providential” intervention, one happening in December 1782 after Yorktown, when most history books assume general military action had ceased.

“What is most worth of notice, is the fact that when these two attempts were to have been made, in which doubtless many lives would have been lost, the preliminary articles [of peace] had been actually signed … not known to us.”

Interestingly, no mention is made of American Captain Nathan Hale, but much of British Major John Andre. Both were hung as spies.

[Andre] “a most elegant and accomplished gentleman.”

An easy read, despite the stilted language of the era. Some of which sounds slightly humorous to modern ears.

“A large body of the garrison were stationed at the place appointed for our landing, which probably would have annoyed us greatly.”