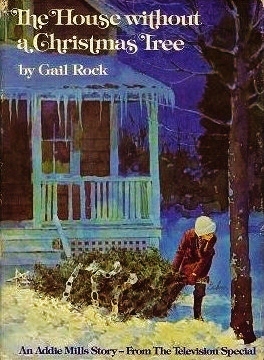 Book Review: The House Without a Christmas Tree (Addie Mills #1) by Gail Rock

“Who says I’m a character?”

Addie’s house doesn’t have a Christmas tree. It’s missing other stuff, too. Though the Christmas season has passed, this gem addresses issues relevant year round.

“In this life you can’t have everything you want.”

Excellent story on many levels. Addie grabs your attention and your heart and doesn’t let go. This forty-year-old, award-winning illustrated novella captures at time (late 1940s) which is beyond the memory of most alive today. The story debuted as a television movie before being published. It’s still being in print tells you something about the universality of the story.

“He’ll be black and blue before he realizes that’s your way of liking.

The Charles C. Gehm illustrations are amazing. He died in 2015. Don’t know if other editions have them, but the one with this cover does.

“No good every came from layin’ blame.”

Good reading for ten year old and seventy year olds. It’s about more than a tree.

“It scared me to think about him being so upset about something that I didn’t even know about.