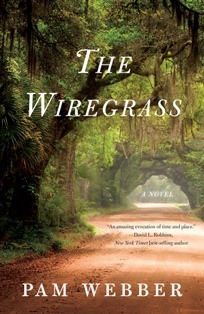 “The innocence of childhood is not lost; it’s taken, and evil is not born; it’s bred.”

This novel blew me away. This is why we should ration five star ratings: so when we give them they mean something. I read the whole thing in one day. It starts slow and mundane enough that the acceleration is barely noticeable until the trees are flying by your window.

The setting is lower Alabama’s wiregrass country in 1968. Webber captures the mood of the times through the mind of a fourteen-year-old just about perfectly. I grew up in Louisiana, rural Kansas and Virginia during the 60s, and lived in the wiregrass region in the 70s. She nails it. Both the details and the ambiance of small town life. The petty and the profound.

“Most folks knew right from wrong; it was just that wrong sounded better at the time.”

The story telling is amazing considering this is Webber’s first novel. Oh, it cries for polishing, but it’s better than many renowned authors with a dozen books on their shelf. Nice cover and internal art.

“How do you make the sad go away?”

Nettie is the ideal viewpoint character. She is innocent and introspective enough that the stupidity and pigheadedness of her male cousins is filtered through a rational, if not-quite-mature consciousness. Family, risk, authority figures look different to a fourteen year old. It’s a beautiful thing to see a child (or an adult) discover empathy.

Quibbles? A few: Too many information dumps, incredibly stupid decision making by said teen boys (which helps build Webber’s credibility: teen boys as a class tend toward action and emotion, not thought), foreshadowing so heavy that she telegraphs every punch, but those punches still sink straight into our celiac plexus.

“Without intercession, evil will beget evil.”

A few comments about race and religion:

There are people of color in the cast, but Webber introduces them so subtly that they stand out as individuals, not stereotypes. Racism was alive and well in lower Alabama in the 60s, but it’s not mentioned because it is peripheral to the story.

“Just do what the New Testament tells you to do, then you don’t have to guess.”

Webber’s presentation of the Christianity of that time and place rings true. Many folks practiced a simple faith uninhibited by denominational strictures. The little churches that dotted the Bible Belt then didn’t have the pipe organs, rock bands, stained windows, laser shows or mega ministries of modern mega-churches, but the pastors and congregants practiced a humble, deeply felt faith … some of them. There were hypocrites and Pharisees then, just as there are now. Like racism, Webber doesn’t go there. When faith enters the story, it is humble and positive. As it was practiced by many folks then and now.

“Pain is a wicked but effective teacher.”

A book worth reading. Worth making into a movie.