A speculative fiction based on the Chicxulub impactor missing the earth, therefore not killing the dinosaur 65 million years ago. In this tale the dinosaurs are the intelligent (some more than others) creatures, and the emerging cave men are language-challenged “critters.”

Good story, fantastic rendering of the background. The Yellowstone/Teton area obviously inspired the setting. The moving water and clouds are rendered better than photo-realistic. (The latter reminiscent of N. C. Wyeth’s best.)

Though apparently aimed at children and rated PG, the violence level shocked some of the little ones in the showing we attended. we heard screams and crying following some of the death and dismemberment scenes.

Poor John Ratzenberger. Included once as Pixar’s lucky charm; he’s reduced again to a character with the least lines. 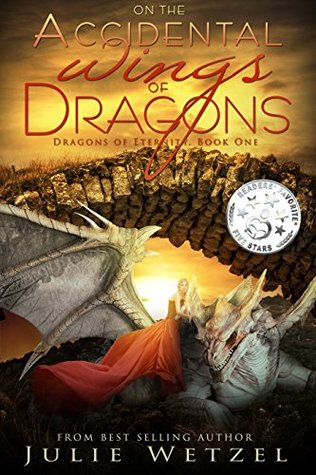 Book Review: On the Accidental Wings of Dragons by Julie Wetzel

Two Stars out of Five.

Wetzel probably a good time writing this, but I’m not into urban fantasy soft porn—even among dragons. The plot and most “action” involved supposedly mature people who act like teens. Hormonally-challenged teens.

Nope, not much to recommend it. Why not one star? She’s actually a good writer. Judging from her website (only) I guess she specializes in hot romances. Apparently there are those who will appreciate this … stuff.