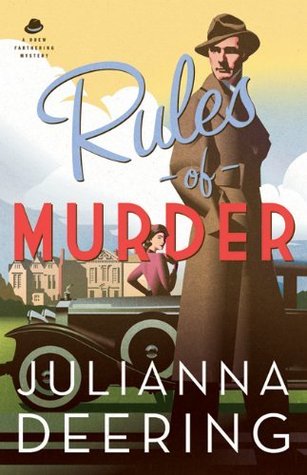 A pleasant period piece of an English murder mystery set in the 1930s. Deering, a pen name for Deanna Julie Dodson, turns many classic mystery conventions on their head as her idle, rich protagonist is drawn into investigating the mysterious deaths of several people near and dear and a few almost strangers. In the process he finds romance and a spiritual anchor in the American niece of his step-father.

Mysteries are not my cup of tea, so I can’t be expected to understand all Deering did to craft this mystery, but I can appreciate her intricate plot and attempts at setting the scene eighty years ago.

That said, the tone was slightly off; it sounds like England as experienced by PBS mini-series. For example, the colloquialisms sound forced. English, especially English men, seldom refer to their car as a 1923 Rolls Royce. Model, presumably Sliver Ghost, rather than year of manufacture is the typical referent. Too many modified adverbs: perfectly, unselfconsciously, and unsuitably.