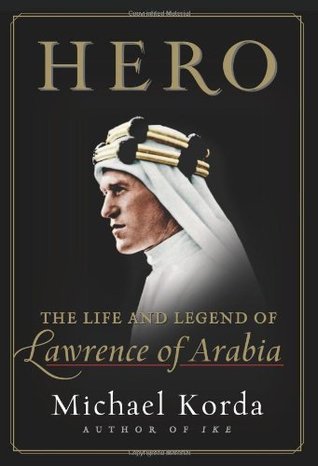 Book Review: Hero: the Life and Legend of Lawrence of Arabia by Michael Korda

Three Stars out of Five
Upwards of fifty biographies have been written about T. E. Lawrence (“of Arabia”). This is one of them. Why the author would undertake such an effort almost a century after the events which catapulted Lawrence to fame only he can tell. It’s not a bad biography, though its efforts to “balance” the record is unbalanced by the author’s many self- and family-referential comments.

Lawrence seems to have spent the first half of his life preparing to become a hero, was one for a couple years, then spent the rest of his life stepping in and out of the limelight of his notoriety.

Numerous references to Princess Diana and current culture (“media feeding frenzy” and “drones”) distracts rather than adds. The text is also marred by numerous untranslated French phrases. Surely Korda understands that Americans are uni-lingual. (One phrase, which partly compensates, is l’esprit de l’escalier, referring to the inspiration for the perfect retort too late.)

That said, Lawrence’s story is one worth preserving and retelling. He pioneered modern guerrilla warfare and successful tactics against it, which neither his country nor the United States have followed. He opposed the mess the 1919 Paris Peace Conference made of the Middle East, which planted the seeds of much of the strife and turmoil which now covers the globe. Prior to World War One, “It was a strict rule of desert warfare that women and children of your enemy were spared.” Blowing up Turkish trains signaled the death knell of that distinction. He was an archeologist, a genius of boat design, and a author of distinction.

(Korda also inserts the provocative note that Woodrow Wilson had the opportunity to partly redress the Turkish genocide of the Armenians but passed.)

A tale worth telling … and reading.